AMD today announced its Ryzen 7000 series of consumer desktop processors. Based on the new AM5 platform and the new Zen 4 architecture, these new CPUs introduce significant improvement in performance over previous generation Ryzen 5000 series as well as introducing cutting edge features like DDR5 and PCIe Gen 5. 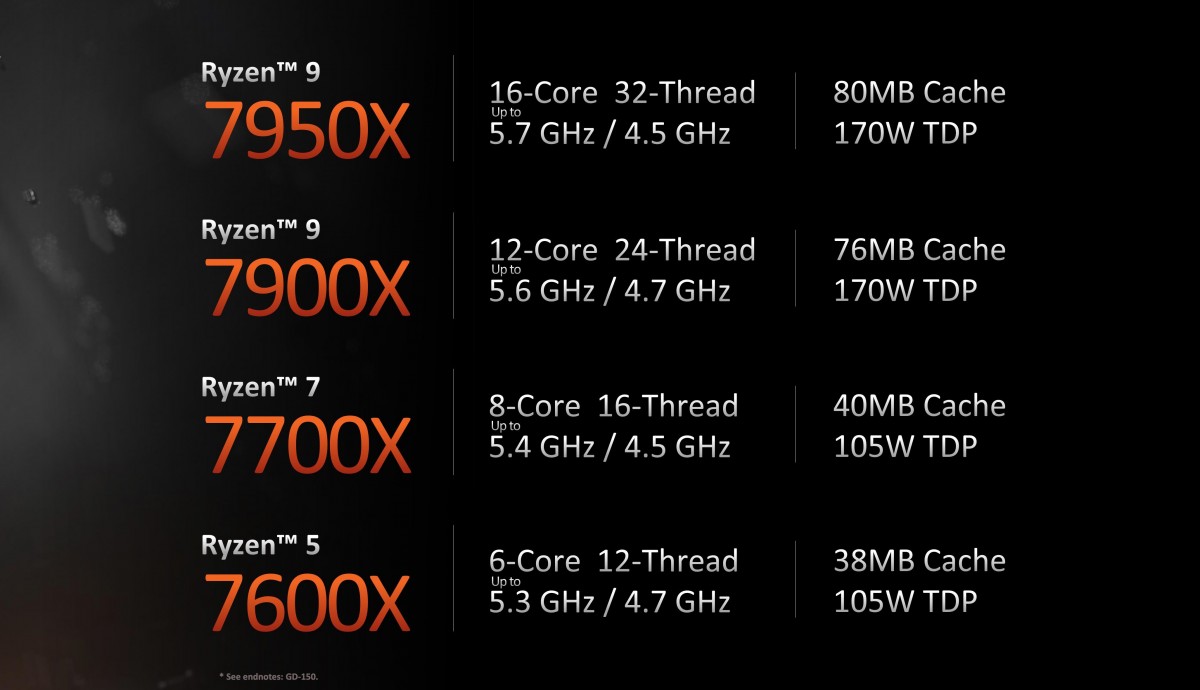 The four CPUs being announced today are the 7950X, the 7900X, the 7700X, and the 7600X. These have similar core and thread counts as the initial wave of Ryzen 5000 releases but with some changes in the prices.

All four processors also include an integrated Radeon Graphics with 2 graphics cores, 2200MHz graphics frequency, and 400MHz base frequency.

The new Ryzen 7000 processors are based on AMD’s new AM5 platform. This new platform starts off with a new socket design with a 1718 pin LGA socket capable of providing up to 230W of power to the CPU. But despite the new socket and IHS design, the AM5 platform is compatible with CPU coolers designed for AM4.

Speaking of coolers, none of the aforementioned Ryzen 7000 CPUs will ship with a cooler in the box.

The AM5 platform brings with it two new motherboard chipsets, the X670 and the B650, with each also having an Extreme version offering more connectivity features.

Together with the new platform and chipsets, the Ryzen 7000 processors will support both DDR5 memory as well as PCI Express 5.0. Unlike Intel, however, AMD is going all-in on DDR5, which means there will be no DDR4 memory support on the AM5 platform.

The AM5 platform will support the company’s new EXPO technology, which is essentially AMD’s version of Intel’s XMP. It’s a one-click overclocking solution for memory and is what AMD processors will be using going forward instead of XMP. By default, the Ryzen 7000 CPUs support memory speeds of up to DDR5 5200MHz but higher speeds can be enabled using EXPO.

One of the most impressive aspects of the AM4 platform was its longevity. AMD is promising platform support through 2025+ for AM5, which means you can expect current AM5 motherboards to be supported at least till 2025.

In terms of efficiency, the company is promising 62% lower power consumption for the same performance and 49% more performance for the same power versus the Ryzen 5000 series. AMD also claims up to 47% more efficiency compared to Alder Lake. AMD provided additional first-party benchmarks versus the competition but we are just going to ignore them for now and wait for third-party testing with less cherry-picked data.

Overall, AMD is promising some good generational improvement with Ryzen 7000 series and the prices at the higher-end seem competitive. However, the cheapest part in the series still starts at $300, which may not seem much at launch until you factor in the cost of the rest of the system, which will include a new AM5 motherboard (which start at $125) and the cost of new DDR5 memory, which is still expensive. The TDP for the 6-core model has also gone up and with no cooler in the box that’s another expense to consider.

Summoners War And Cookie Run: Kingdom Are Coming Together In A Sweet Collaboration

Spaceship witch shooter Chorus is worth sticking with on Game Pass

Sony Raises PS5 Prices, But Not in the US