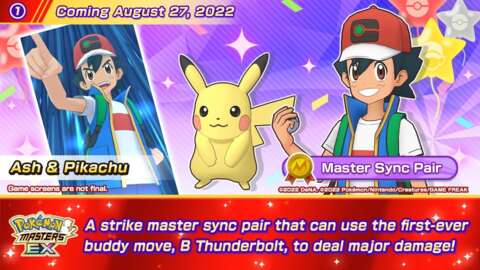 As part of Pokemon Master EX’s third anniversary, players can now obtain and play as anime protagonist Ash, for the first time in any Pokemon title. The anniversary celebration includes other events and the announcement of other sync pairs.

As previously teased, Ash and Pikachu can battle together as a sync pair. This grants them special moves, like B Thunderbolt and Best Buds 10,000,000 Volt Thunderbolt. You can add the pair to your team via the Ash Master Fair Scout until October 16. Players can also interact with Ash through a variety of special events.

In Blazing Battle, Ash joins a tournament for trainers who have just arrived in the game’s setting of Pasio. It features new story beats and battles. A Challenge From Ash lets players fight the legendary trainer. Additional daily training against Ash is also available until September 26. You can also battle against Ash with your Pikachu in The Classic Thunderbolt event, which lasts until October 16.

A new mode called Trainer Lodge also recently released. Here players can chat with their favorite trainers, give them presents, unlock photographs and other story content. You can even send trainers on expeditions to get rewards.

The anniversary also comes with log-in bonuses. Any player who logs into the game before October 2 will receive 3,000 gems. Players who log in 14 times until September 13 can earn an additional 3,300 gems. Additionally, if you log in before September 14, you can receive ten pairs of Scout Tickets. When exchanged, you can earn up to 100 sync pairs by logging in ten times and getting a pair from each scout. The tickets must be redeemed by September 21.

Windows 11 is getting an update that IT admins will celebrate

Best laptop deals: Get a portable workhorse from $98 today

Why the Twilio Breach Cuts So Deep