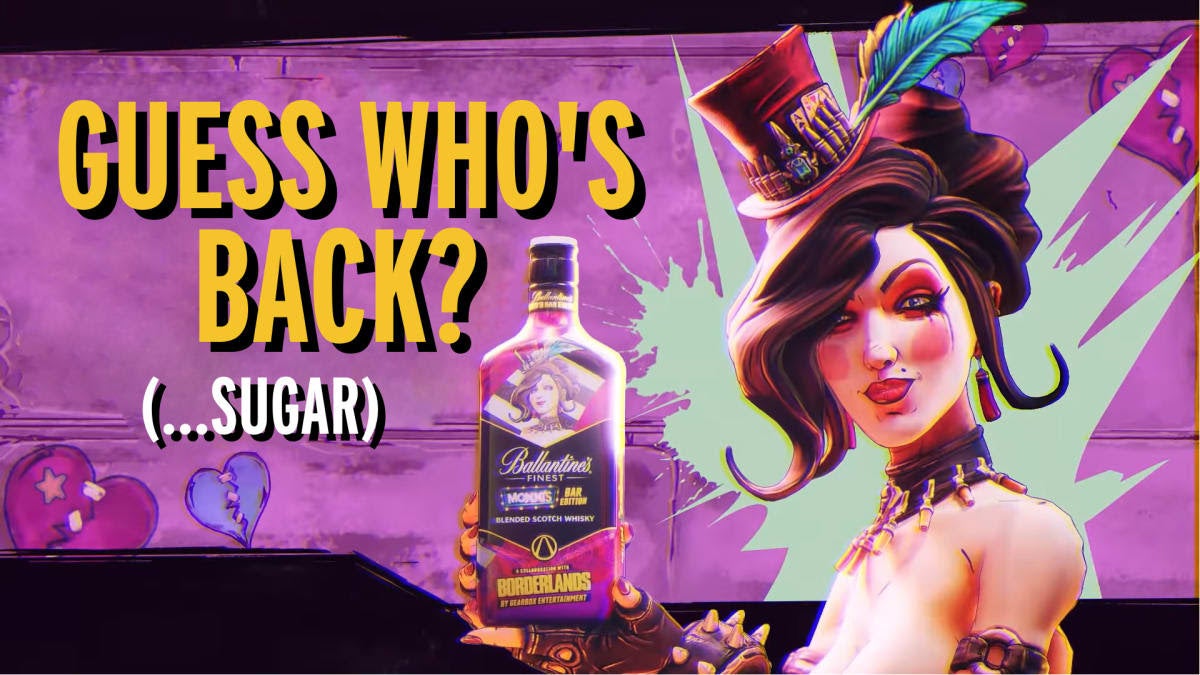 Good news for Borderlands fans who like a tipple – Moxxi’s Finest whisky is back in stock.

Developed in conjunction with Ballantine’s, Moxxi’s Finest is Moxxi’s “very own exclusive bottle of whisky”. “Like most things in life”, the re-released Ballantine’s x Moxxi Bar Edition is available to buy now on a first come, first served basis.

Players who manage to grab a bottle will also get access to “four exclusive and playable in-game heads from Pandora” courtesy of a QR code on the bottle.

Ballantine’s Finest Moxxi’s Bar Edition is out now for £22.95 via The Whisky Exchange. Head on over to the Ballantine’s website for recipes of four “exclusive cocktails”: Apocalypse Spritz, a Bloodshot Eye, a Sandbox Sip and the Moxxi’s Mule.

Good things come to those who wait, sugar 😉 My limited-edition whisky is back! Check out this little video from yours truly and head over here to get your hands on a bottle! 💋 https://t.co/hLzwC3Xy0c pic.twitter.com/n6aV7SXJbO


“A collaboration between Ballantine’s and Gearbox Entertainment’s Borderlands franchise, one of the most popular first-person shooter games in the world,” the store description declares.

“This limited-edition Ballantine’s Finest champions Borderlands’ Mad Moxxi, a bold and daring non-playable character who owns a bar on Pandora – one of the planets in Borderlands. The striking label features Moxxi herself and embodies her colourful style, as well as a QR code that gives fans of the game access to exclusive gameplay skins.”

Earlier this week, a surprising Amazon listing provided fresh details on New Tales from the Borderlands, the Gearbox-developed follow-up to Telltale Games’ 2014 episodic adventure of almost the same name. Though not formally announced, the listing suggests it’ll launch for Xbox One, Xbox Series X/S, PlayStation 4, PS5, Switch, and PC on 21st October.

As Matt summarised for us at the time, original developer Telltale shut its doors in 2018 – and given the relative commercial failure of the original game – it seemed like a sequel might never come to pass. However, Borderlands developer Gearbox surprised everyone back in April when it announced that a follow-up wasn’t just in the works but would be out by the end of the year.

Nine questions everyone asks us about air fryers