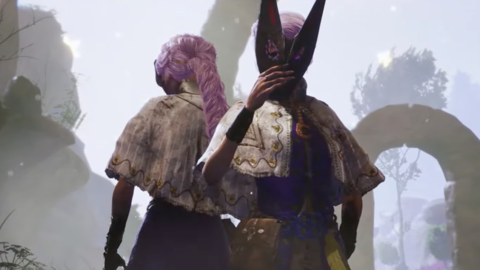 Gamescom took time to show some interesting smaller projects, and one of them was an intriguing new title called Blacktail. The game from The Parasight centers on two sisters based on Slavic tales of the Baba Yaga. It’s coming this winter to PC, PS5, and Xbox Series X|S.

In Blacktail, you play as Yaga, a girl who is accused of witchcraft in early medieval times. Yaga becomes haunted by memories of her past and sets out to hunt them down in a journey through the woods. The announcement suggests there will be an element of choice, letting you become a good witch and protector of the forest, or an evil witch who haunts the nightmares of small children. Creepy!

The trailer showed some story segments, as well as exploring the woods armed with a rudimentary bow and being confronted by dark impish creatures and other beasts from folklore.

As opposed to traditional western fairy tales, in Slavic folklore, the Baba Yaga is often morally ambiguous. Her magic often helps start the protagonists’ quests, but she isn’t often an outright villain.

How to turn off precise location on your iPhone