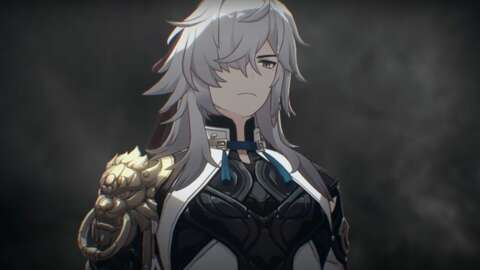 In Dan Heng’s nightmare, Blade–who looks like he’s been arrested for something–tells Jing Yuan, “Of five people, three must pay a price. You are not one of them, Jing Yuan.”

Dan Heng’s dream then skips to Blade telling him, “You are one of them.” Dan Heng, upon waking up, exclaims that the Xian Zhou Alliance is in danger and is about to say something about the man in his dreams, before the trailer leaps to the train getting ready to make a teleportation jump.

Dan Heng, Jing Yuan, and Blade are all playable characters in Honkai: Star Rail. Blade was recently announced in May 2022 on Hoyoverse’s blog. He’s a member of the Stellaron hunters and wields an ancient sword. With wind powers, Blade can consume his own HP to buff his own basic attack. Most of Blade’s special skills consume his HP in order to provide an advantage in battle.

Dan Heng is a guard of the train Astral Express, and Jing Yuan is a general in the Xian Zhou Alliance. Hoyoverse also released a teaser of Jing Yuan’s abilities. He’s a lightning character who can summon a Lightning Lord to fight alongside him.