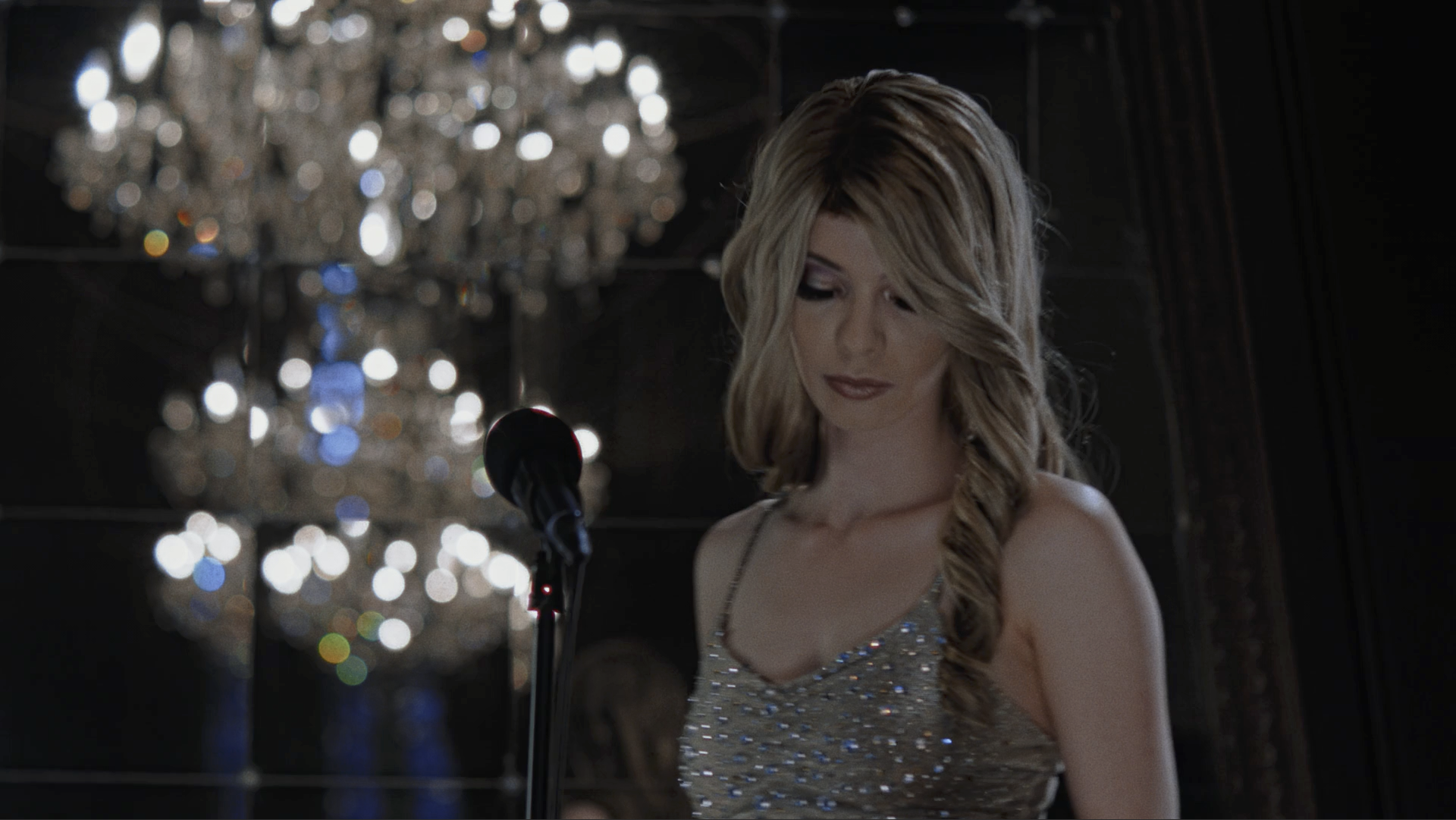 “Immortality is an astonishing work of interactive fiction that’s every bit as unsettling and unforgettable as the films that inspired it.”

There’s a moment in Ingmar Bergman’s Persona (no, not that one) that has haunted me since I first saw it. Late in the film, Elisabet, an actress recovering from a mental break at an isolated summer cottage, and her nurse, Alma, begin to lose their sense of self. After delivering a monologue revealing Elisabet’s darkest secret, Alma enters a cabin fever-induced panic, terrified that she and Elisabet could be the same person. The film suddenly merges the two characters’ faces into one alongside a discordant music stab. In that moment, it’s not just Alma who’s stranded on the outskirts of reality, but the viewer too.

It’s no surprise that I had a similarly unsettling moment playing Immortality, the latest game from director Sam Barlow and his studio, Half Mermaid Productions. The psychological horror game plays like a wildly ambitious modernization of Persona, riffing on its most harrowing ideas and images. During one scene (a disturbing moment I couldn’t sufficiently explain even if I wanted to spoil it), I let out a sound somewhere between a befuddled gasp and a guttural scream. It wasn’t because of a cheap jump scare. Rather, it was because the game had robbed me of a crucial human skill: the ability to differentiate reality from fiction.

Immortality is an astonishing work of interactive media, one that fully realizes the potential of Barlow’s signature full-motion video (FMV) style. It explores our complex, and perhaps unhealthy, fascination with art, all while delivering a level of craft that’s light-years beyond what any other game has even attempted to achieve.

Even if you’ve played previous Barlow works like Her Story, you’re bound to be shocked by the sheer scope of Immortality. Presented as a fictional film restoration project, players are tasked with uncovering the mystery of Marissa Marcel, an actress who has all but vanished from the public eye. To piece together the mystery, players sift through hours of footage pulled from her only three films, a trio of unreleased projects made between 1968 and 1999.

The dedication to craft here is unlike anything we’ve seen in interactive media.

It’s an impressive pitch on paper, but even more astounding in practice. Half Mermaid essentially created three films here, all of which are painstakingly detailed period pieces from different decades. For instance, 1968’s Ambrosio is a smutty adaptation of gothic horror classic The Monk, complete with giant matte paintings. Two of Everything, on the other hand, is a 1990s Hollywood thriller that’s a dead ringer for Basic Instinct. Each film is an authentic homage to an era of American cinema, right down to the aspect ratio of the footage.

What’s more impressive is how Immortality weaves Marcel’s complicated past between movie scenes via increasingly clever video snippets. Rehearsal footage, screen tests, on-set dailies, behind-the-scenes clips, late-night talk show appearances — the Half Mermaid team has a field day turning various types of archival footage into effective storytelling vehicles. Even the most mundane on-set footage can contain subtle clues, whether that be through a stray line picked up before a slate claps or an acting moment that feels suspiciously real.

A high-concept idea like that demands strong performances, and Immortality is loaded with them. In particular, actress Manon Gage, who portrays Marcel, accomplishes an astonishing feat here. She’s not only portraying a woman on the verge of a nervous breakdown, but developing her over a 30-year span while playing all of her film roles too. Gage’s ability to seamlessly blur the lines between fact and fiction (well, fiction and fiction within fiction) sells Immortality’s entire magic trick, creating disorienting scenes that take multiple replays to untangle. I hesitate to even call out her performance, as it feels like I’m breaking a sacred oath with the game to acknowledge how it’s made.

It’s clear that Immortality is a game created by cinephiles. The dedication to craft here is unlike anything we’ve seen in interactive media. It doesn’t just raise the bar for FMV games, which often struggle to achieve film quality; it picks that bar up and sets it down 30 years into the future.

The genius of Barlow’s work is that he’s secretly crafting puzzle games as much as he is narrative ones. Like Her Story and Telling Lies, Immortality hands players a big box of puzzle pieces and doesn’t offer any guidance from there. Think of it as a deconstructed true crime podcast. Players essentially take on the role of a researcher here, painstakingly mulling over footage and mentally piecing the real story together.

It plays out like a classic point-and-click adventure game, where curiosity always yields reward.

The key difference between Immortality and Barlow’s previous work is how players actually sort through the clips. Rather than having players type words into a database to search for footage, the game features an ingenious — and narratively fitting — mechanic: match cut. At any time during a clip, players can click on an object or person. The game will “match” what they clicked on to an image in another clip, transitioning them over to a new discovery (imagine being a prop master on a project like this). It plays out like a classic point-and-click adventure game, where curiosity always yields reward.

It’s an incredible trick, even if it’s a little finicky at times. On multiple occasions, I’d click on something, only for the game to exit me back into the clip I was already on. Immortality has no way of marking clips you’ve already seen, so I’d often find myself bouncing back into scenes I’d already viewed looking for a path to something new. That’s a minor quirk though, as the system is so fast and fluid that it’s satisfying to slip in and out of clips.

The only real frustration comes from the clip playback controls. To further sell the archival premise, the game mimics the motions you’d need to use on an old film reel editing machine. That means pushing back and forth to rewind or fast-forward rather than scrubbing a digital timeline bar. It’s a cumbersome process, especially with a mouse, as it’s hard to get a reel moving at a steady, consistent speed. There’s a very good reason it’s so difficult to wrangle, but it can be a pain point late in the game when precise scrubbing becomes necessary.

Technical eccentricities aside, Immortality is a subtle, but major step up for Barlow when it comes to interactivity. I’m not just typing words into a search bar and watching clips. I’m transported to a vintage edit bay tucked away in some dimly lit room — I can practically smell the mold. It’s a more physical process, making me feel like an active crew member in Marcel’s world.

“What happened to Marissa Marcel?” makes for an engrossing mystery hook, but Immortality uses that as a springboard to explore much larger questions about art. The game’s title is a loaded one in that respect (and many more, as it’s as multilayered as the narrative itself). Marcel is a specimen trapped in amber. It doesn’t matter what her fate is; she has transcended mortality, with every aspect of her real and fictional lives preserved on film

That’s where the game’s psychological horror comes into play. I got a thorough image of Marcel by the end, but was I ever really seeing her true self? When we see her, she’s always engaged in some kind of performance: acting on set, auditioning for a role, turning on the charm for a talk-show host. The lines between Marcel the human and Marcel the actress are hazy, and there’s a sense that not even she’s able to separate them at a certain point. She’s the image of Alma and Elisabet’s face grafted together, silently pleading for help as it stares out from a celluloid prison.

Like Persona, some of the game’s most disturbing images are its subtle ones. In one clip, she dances in a motion capture suit and then watches as her body is instantly digitized, her entire identity distilled into a featureless 3D puppet. Even if Marcel tries to escape, she can be resurrected as a vague icon for the public to consume — her digital doppelganger is even split into three identical wireframe models to really twist the knife. Immortality is her curse.

There’s another layer to both the narrative and the sprawling thematic puzzle — both of which are best left to be discovered. All I’ll note is that the game reflects on the audience’s obsessive relationship with art. The human urge to escape into stories and insert oneself into fiction is a core focus here, and one that gives the game its most unsettling moments. If Marcel is a victim, who is complicit in her downfall? Is it just the industry that manipulated her? Or are the people who desperately wanted to live through her in some way responsible for devouring her?

I still feel it wriggling and squirming somewhere inside of me, daring me to dig it out.

Those looking for a tightly gift-wrapped narrative that answers every question will be left puzzled as Barlow wears his David Lynch influence on his sleeve here (if the game’s homage to Mulholland Drive isn’t clear, its Twin Peaks: Fire Walk With Me-inspired promo art should be a dead giveaway). Some mysteries are left unsolved, leaving players to piece it together and interpret its meaning. That decision stands to give Immortality as long a life as the eternally puzzling cinematic works that influenced it.

It’s been well over a decade since the first time I saw Persona and I still can’t escape it. It’s just part of me now. So too is Immortality, a game that has a way of burrowing its way into your chest if you’re patient. Long after rolling credits, I still feel it wriggling and squirming somewhere inside of me, daring me to dig it out. Perhaps that’s Marissa Marcel pounding on the walls of her new prison.

Immortality is a landmark release for Barlow and Half Mermaid Productions. It’s an all-engrossing FMV horror game made with the highest level of cinematic craft I’ve seen in a video game, though its interactive systems are a touch clumsy. Marissa Marcel’s story is a harrowing one, full of haunting moments that unsettled me to my core. If you’re patient enough to let its slow-burn story engulf you, you’re in for an unforgettable arthouse experience.

Is there a better alternative?

You’ll have to look toward film to find anything remotely similar. Persona and Mulholland Drive both immediately spring to mind, as Immortality neatly slots into that storied lineage of psychosexual thrillers.

How long will it last?

That’ll vary considering the staggering amount of footage in the game that’s explored in nonlinear fashion. I rolled credits at around eight hours and certainly didn’t see it all.

Should you buy it?

Yes. Immortality is unlike anything I’ve ever played, including Barlow’s previous works. Whether or not it’s your thing, it’s sure to stick with you much longer than anything else you’ll play this year.

Immortality was reviewed on PC.

Your next coffee table book is all about Capcom – Destructoid

Paradox’s next grand strategy simulation will launch in October

Here’s a quick tutorial for Splatoon, ahead of Splatoon 3 – Destructoid