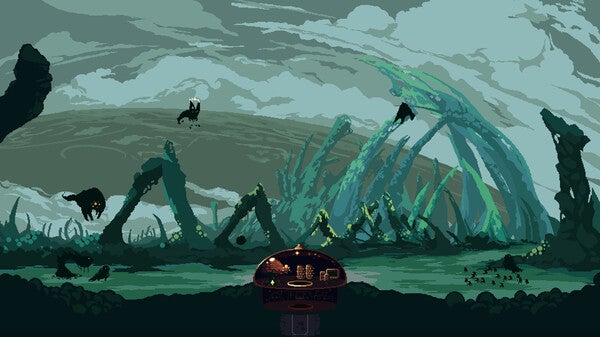 In anticipation of the full release – which will be coming to Steam – developer Bippinbits will be taking down its free playable demo on 5th September, so don’t hang about if you’ve been meaning to try it.

Dome Keeper – once known as Dome Romantik – boasts “beautiful updated pixel art, atmospheric music and sound” and sees you defend your dome from wave after wave of hostile attacks in this roguelike survival miner. Inbetween attacks, you need to dig beneath the surface in search of valuable resources which can be used to make upgrades to help you stay alive and “make it to the next world”.

In preparation for release, the demo will be taken down on the 5th of September at 00:00 PDT!

We’ve really enjoyed seeing how much you love the demo and we can’t wait for you to get your hands on the full game. More news soon! pic.twitter.com/THlbuC4R45


“At first, playing the recent demo, I was like: hey, this is SteamWorld Dig! Kind of. I’m on an strange planet, protected by a funny little dome. There’s a tunnel leading down, so down I go. I hit rock and start to drill. The rock breaks. Sometimes it contains gems, which I can haul back up to the dome to be processed. Sometimes I’m just making empty tunnels. The walls around me alive with possible riches. Where do I want to dig next?”

AMD Ryzen 7000: everything we know about Zen 4 CPUs

Legally Blonde: The Game lets you solve match-3 puzzles, customise your outfits, win cases and more, out now on mobile

What’s new on Peacock in September 2022