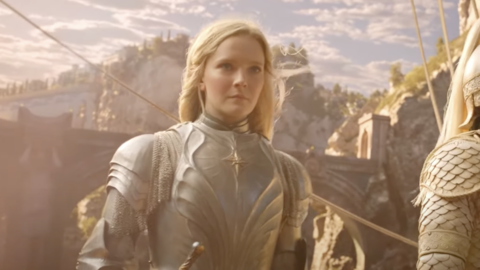 Amazon Studios’ Lord of the Rings TV series, The Rings of Power, is set to premiere next week. Ahead of that, social media reactions are in, and many are speaking very positively about the show.

Devan Coggan of Entertainment Weekly said the first two episodes they saw were a “total joy.” Coggan added, “Watching it feels like stepping back into Middle-earth.”

You can see more reactions below.

The Rings of Power premieres September 1 at 6 PM PT / 9 PM ET with two episodes. Fans wanting to watch a little sooner can see the episodes in theaters for a one-night event on August 31. The remaining episodes will air Fridays at 12 AM ET on Prime Video.

#TheRingsOfPower is a CINEMATIC MASTERPIECE! The visionary team behind it has produced an epic that dives into its roots and delivers a story like no other. Its production is beyond comparison, masterfully orchestrating a mythology that fans have been waiting for. Bravo! pic.twitter.com/nvebQkdEx7

Here’s something you probably didn’t expect to hear. I thought #TheRingsOfPower was pretty great. Interesting new characters. Unusual locations. The looming threat of Sauron and some spectacular visual imagery. I devoured the episodes, and am excited to watch more. pic.twitter.com/uCTsjnLZpZ

I have seen the first two episodes of The Lord of the Rings: The Rings of Power, and they are a total joy. Watching it feels like stepping back into Middle-earth. I cannot wait to see where this story goes.

Gotta admit I wasn’t overly excited about #TheRingsofPower Then I watched the first 2 episodes & I’m fully converted. The production is beautiful w/ excellent blend of physical & VFX. Great cast who pull you into the various plots. It’s now on my ‘most excited to see more’ list pic.twitter.com/yxZbay2uXp

Save $200 with this back-to-school Acer laptop deal

Grab these Switch Online Xenoblade Chronicles 3 icons before they vanish

Millions of Plex users may be at risk in password breach