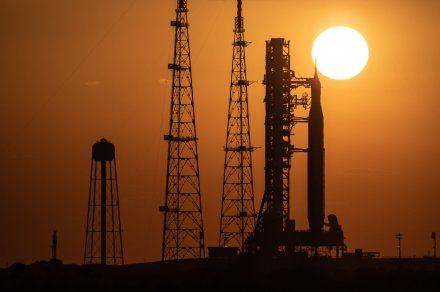 An issue with one of the four main engines forced NASA to call off the launch of its mega moon rocket just 40 minutes before it was due to lift off on Monday morning.

As of Monday night, the new Space Launch System (SLS) rocket and Orion spacecraft remain on Pad 39B at the Kennedy Space Center in Florida while the Artemis I mission team consider what to do next.

The next opportunity to launch the Artemis I mission to the moon is on Friday, September 2. But this can only happen if NASA engineers can quickly fix the issue that it spotted on the number three engine of the rocket’s core stage earlier on Monday.

Failing that, the next window opens on Monday, September 5.

NASA has announced it will hold a media teleconference at 6 p.m. ET on Tuesday, August 30, to discuss the matter. It’s hoped that during the teleconference the mission team will be in a position to confirm the time and date of the next launch attempt.

The highly anticipated Artemis I mission will be an uncrewed flight aimed at testing NASA’s new SLS rocket and Orion spacecraft. The spacecraft will be sent on a voyage around the moon before returning to Earth six weeks after launch.

“Through Artemis missions, NASA will land the first woman and the first person of color on the moon, paving the way for a long-term lunar presence and serving as a steppingstone on the way to Mars,” NASA said.

With so much at stake with Artemis I, it’s no surprise that NASA called off Monday’s launch after spotting the engine issue. Not wanting to rush decisions in a bid to send the rocket on its way before the launch window closed at 10:33 a.m. ET, the team decided to stand down and get some rest, enabling it to tackle the situation with fresh minds on Tuesday morning.

Speaking to the BBC after NASA called off Monday’s launch, Dr Wendy Whitman Cobb, professor of strategy and security studies at the School of Advanced Air and Space Studies in Montgomery, Alabama, described the situation as “not much of a setback at all,” adding that Space Shuttle launches, for example, rarely went ahead at their first scheduled time.

“Since this was a test, these types of issues coming up were expected,” Whitman-Cobb said, adding, “I think I would’ve been more surprised if it’d actually gone up on time today.”

NASA Delays the Launch of Its Giant Moon-Bound Rocket

Does the Samsung Galaxy Z Flip 4 have an SD card slot?

Apple’s September event: iPhone 14, Apple Watch Pro, and everything else to expect

The best color laser printers for 2022