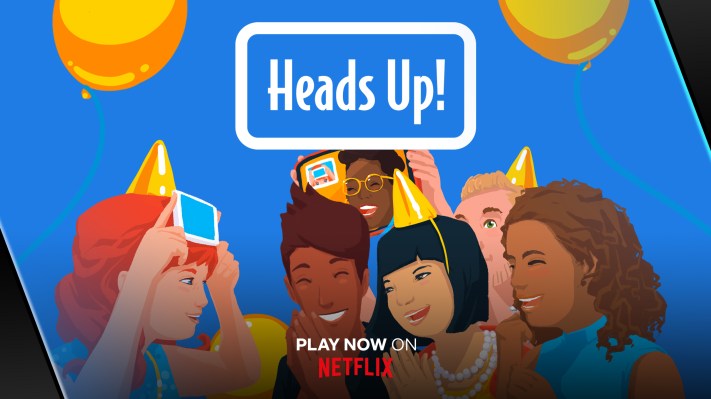 Netflix is expanding its roster of games with the addition of “Netflix Heads Up!,” an exclusive version of the popular mobile game, the company announced today. Heads Up! is a twist on charades where players have to guess the words on another player’s forehead before the one-minute timer runs out.

The game is rolling out globally to all iOS and Android Netflix subscribers and is available in 15 languages, including English, French, German, Italian, Japanese, Korean, Portuguese and Thai.

Netflix subscribers will be able to play the game with 28 decks inspired by some of the streaming service’s most popular series, including “Bridgeton,” “Stranger Things,” “Squid Game” and more. Players will also be able to share recordings of their matches with friends and family on Instagram, TikTok, WhatsApp and more.

Heads Up! was developed by Gasket Games and U.S.-based publisher Ellen Digital Venture and has amassed more than 70 million downloads and over 40 million users. The game began on The Ellen DeGeneres Show, when DeGeneres played the game with guests holding physical cards. The game was then turned into an app, which launched in May 2013 and immediately rose to the top of the App Store.

Now, nine years later, Netflix is adding its own version of the app to its games catalogue. The launch comes as Apptopia recently revealed that Netflix games have been downloaded 23.3 million times in total, which means that fewer than 1% of the streaming giant’s subscriber base, which consists of around 221 million subscribers, are interested in Netflix’s games.

The addition of Heads Up brings Netflix’s total games count to 27. Netflix plans to have more than 50 games on its platform by the end of the year.

Netflix launched its gaming service in November 2021 and has been adding new games to its catalog every month. Currently, the titles are free to play and don’t include any in-app purchases. The company sees games as a means of growing and maintaining its existing subscriber base, and considering Netflix recently lost nearly one million subscribers, it’s not hard to see why the company wants to invest in more games.

New Tales from the Borderlands unveiled, launches in October

Blank screens and a bad neck: hands-on with the Samsung Odyssey Ark monitor