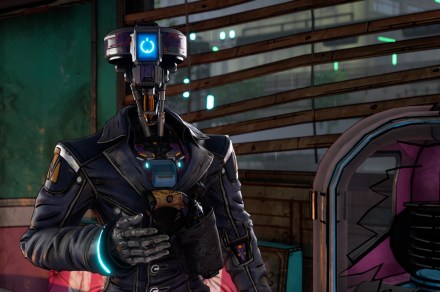 Gearbox Software and 2K announced during Gamescom Opening Night Live that New Tales from the Borderlands will launch on October 21. We also learned more about the new cast of characters that this successor to one of Telltale’s best games will follow.

New Tales from the Borderlands follows three characters, Anu, Octavio, and Fran, in the rundown city of Promethea. Anu is an ambitious scientist, contrasting with her more street-smart brother, Octavio. Fran has a habit of slinging frogurt at her enemies. The three of them will go up against a planetary invasion, a vault monster, and a group of capitalists, and the choices the player makes along the way will impact the story’s outcome.

Those who pre-order the game will receive the Adventure Capital Pack, which contains cosmetics for Anu, Octavio, and Fran, as well as 10,000 units of in-game currency and an FL4K Vaultlander collectible. The standard edition is digital-only and costs $40. The deluxe edition will be available in both physical and digital formats for $50 and includes a digital copy of the first Tales from the Borderlands game.

While the first game was developed by Telltale Games, that studio closed its doors in 2018. Tales from the Borderlands was released in 2014, but was delisted for a short time after Telltale’s closure. However, the game come back to digital storefronts in February 2021, along with a release on the Nintendo Switch in March. Now, New Tales of the Borderlands is being developed by Gearbox Quebec, who partnered with former Telltale writers that worked on the original narrative.

Gearbox and 2K announced the existence of the follow-up game in April, and it was accidentally leaked through Amazon last week, but now we have an official confirmation.

New Tales from the Borderlands will be released for PC, PS4, PS5, Nintendo Switch, Xbox One, and Xbox Series X/S on October 21.

Netflix adds ‘Heads Up!’ to its games roster with decks based on its hit shows, including ‘Stranger Things’ – TechCrunch

Join us here on Destructoid for Gamescom Opening Night Live!

Playing a Janet Jackson song would crash some old laptops

How to add hyperlinks in Word

Koch Media rebrands as Plaion to “acknowledge who we truly are”

Reviews Featuring ‘Pac-Man World’ and ‘Islets’, Plus the Latest Releases and Sales – TouchArcade