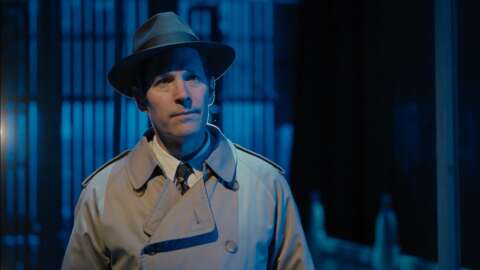 With the solving of the second murder in the building of Hulu’s Emmy-nominated comedy series Only Murders In The Building, they’ve set up the case once again for Season 3 and Paul Rudd will be joining the cast.

At the end of the Season 2 finale, Oliver (Martin Short) was named director of a Broadway play that will open in a year. The play is also starring actor Ben Glenroy (Rudd) who also clashes with Charles-Haden Savage (Steve Martin). During the play, Glenroy stutters his lines, collapses on stage and dies. For Season 3, we go back and forth within that year and get to the bottom of why Glenroy and Savage strongly dislike one another and if Savage is the main suspect.

Talking with Deadline, Only Murders’ co-creator John Hoffman talks about what Rudd will bring to the cast and why he set up Savage in that way.

“We’re all fans of his. But also, Paul has a pretty close relationship with Martin Short and he also made a film with Selena [Gomez], and she adores him,” Hoffman said. “But the kicker is that Paul has revered Steve Martin since he was a kid, so all of these things came together for this very big ask.”

Hoffman added that they were trying to figure out a major movie star that could come and do a five-minute cameo, but also come back in the next season to tell the who and the why, especially if they had time to. “We need to have time with him; would he come back and play with us in Season 3? God love Paul Rudd because he immediately said yes,” said Hoffman.

Seasons 1 and 2 of Only Murders In The Building are readily available exclusively on Hulu.

How to Nurture IT Talent and Protect Your Stars