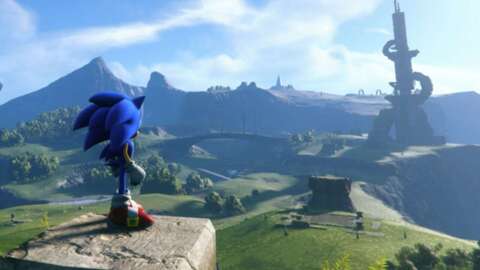 Sonic Frontiers will offer a fresh spin on 3D Sonic platforming in just a couple short months. If you’re looking forward to the Blue Blur’s upcoming outing, you can save on your preorder through Fanatical right now. Fanatical is offering a $7 discount on PC preorders. You’ll also get a voucher for 5% off your next purchase along with the Adventurer’s Treasure Box preorder bonus.

The deal is only valid for the PC version of Sonic Frontiers, which is offered as a Steam key. If you’re itching for some Sonic action today, you’ll also find Sonic Mania, Sonic the Hedgehog 4, Sonic Origins, and more on sale.

Sonic Frontiers marks a new era for the franchise. You’ll get to explore five gigantic worlds, tackle dozens of deadly enemies with a fresh combat system, and unravel a mysterious narrative that’s still tightly under wraps. It’s not all about speed and combat, however, as you’ll get to enjoy some platforming puzzles or go fishing when you need a break from the action.

There’s also a skill tree for you to play around with, giving you a chance to unlock a variety of new skills and upgradable abilities as you advance through the game. Dodging attacks, performing parries, and launching a myriad of special abilities look to be the keys to success–and early footage has shown off a game that looks radically different from past entries. This current deal is best we’ve yet seen for Sonic Frontiers, so be sure to check it out if you’re looking to snag the game on PC.

This new Google Meet update could be a real career-saver

KartRider: Drift is now open for pre-registration with a special gift and platform-exclusives

MultiVersus’ delayed season one and battle pass are coming next week