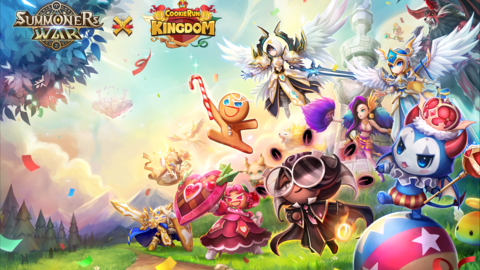 Two popular mobile RPGS–Com2uS’s Summoners War and Cookie Run: Kingdom from Devsisters–are coming together for a major crossover event within Summoners War beginning today. New characters, events, and missions will be available throughout the collaboration, but how do two very different franchises join together in an event like this?

We spoke with Taehyoung Kim, the head of Summoners War developer Com2uS’s Summoner Studio, about the new collaboration, including how the two universes fit together, the origins of the partnership, and how long the partnership will last.

Kim also spoke to us about the types of in-game events players can expect from the collaboration, including event dungeons and additions to the Sky Island, as well as a clarification on how summoners and Cookie Kingdom citizens measure up to one another.

This interview was conducted via email.

GameSpot: How did this collaboration come about?

Taehyoung Kim: We considered three things when deciding on another IP to collaborate with. How well it fits, how different it is, and how enjoyable it would be when paired with Summoners War.

The games have some similarities, like being turn-based collection RPG with lots of characters and having a village or Sky Island to decorate, produce and collect.

We also considered the differences. We wanted to find characters with a different look and feel from our own. We appreciated how Cookie Run Kingdom conceptually has a lot of fun and lovable characters.

I personally had a lot of fun playing Cookie Run Kingdom. It is a well-made game with lots of cute elements which makes for a satisfying experience. Not just myself, but many other developers on the team also thoroughly enjoyed Cookie Run Kingdom and agreed that bringing two games together would provide a unique and enjoyable experience for our players.

What, in your opinion, made Cookie Run: Kingdom a good fit for Summoners War?

Kim: In addition to what we already mentioned, we felt like the game fit very well with Summoners War. It is a turn-based collection RPG with lots of unique characters. You can also set up your own village like you can set up your Sky Island in Summoners War. We were able to easily come up with ideas on how to carry out the collaboration.

We also considered other cookies like Sea Fairy Cookie, Custard Cookie III, Dark Choco Cookie, and so on. We wanted the characters we selected to be different from what you would expect to see in Summoners War. Custard Cookie III was one of the final candidates and our personal bias, but we ended up choosing Pure Vanilla Cookie for the Healing type to best fit in Summoners War.

Will there be a lore/story explanation regarding how these two universes have joined together? If so, what’s the story there?

Kim: We didn’t give a particular story to the two worlds meeting. There are many stories being told through various outlets in Summoners War at the moment, so we thought it’d make it too complicated if we tried to mix in lore from Cookie Run: Kingdom. We incorporated simple conversations in the beginning of the collaboration content, but they don’t involve in-depth story.

How will the special events help those who may come to Summoners War from Cookie Kingdom adapt to the new game?

Kim: Various events will be held not only for the players of Cookie Run: Kingdom, but also for the existing Summoners War players. A good amount of various scrolls will be rewarded to increase the chance of players summoning collaboration characters, along with various in-game goods including runes and devilmons to grow them. One of the cookies, GingerBrave, will be rewarded to the players as part of an event.

Also, we’ll be introducing a brand new special item called the Kairos Dungeon Rune Set Fix. It is a very special item that will allow players to choose the set option for runes dropped in Kairos Dungeon, which will be a major help for rune farming.

Can you give us more details on those special events? How do they stand out from the normal Summoners War experience?

We’ll also be introducing various decoration buildings for players to add to their Sky Island, including a building where players can collect all of the collaboration characters in one place and Jellybean Farm. Although decorating their Sky Island with buildings and decor is an already existing concept, a new in-game currency, jellybeans, will be introduced as collaboration goods and produced from the Jellybean Farm.

How long will the crossover event run?

Kim: We’re currently preparing a lot of special events so that we can pack the two months of collaboration period with lots of fun!

It seems all the characters are the same relative size. Are the cookie people just giant cookies, or are the Summoners really small?

Kim: That’s an interesting question. Actually, there are size differences between each cookie. We adjusted their size within appropriate range because we couldn’t make the size too big or small considering the animation of Summoners War.

If we were to keep the size of the cookies the same, we thought they would be too small and hard to see in the Summoners War universe.

The Lords of the Fallen revives a long-dead Soulslike sequel

Soul Hackers 2 beginner’s guide: 9 tips and tricks to get started