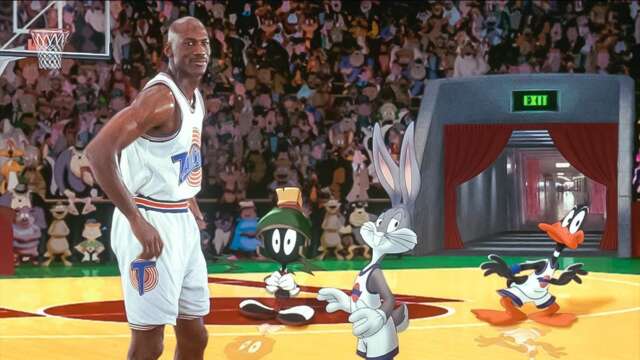 You know what they say: You don’t know what you have until it’s gone. This time next year, who knows what HBO Max will look like as its new owners remove existing content and cancel or gut other projects? Right now, though, HBO Max is bar none one of the best streaming services out there both in terms of original content and back catalog materials. Warner Bros., as well as studios they’ve acquired or have licensing agreements with, has produced some of the very best science fiction cinema over the years. We waded through the huge glut of sci-fi content on HBO Max to find best way to use your time with the service.

This list runs the gamut of science fiction, from hard sci-fi and speculative fiction to features for kids and classic monster movies. There is certainly something on this list that will make you stop and say “hey, that’s not sci-fi!” no matter your definition. However, every movie on this list is more than worth watching, whether because it’s just a great movie or because it sets the stage for what would come after. 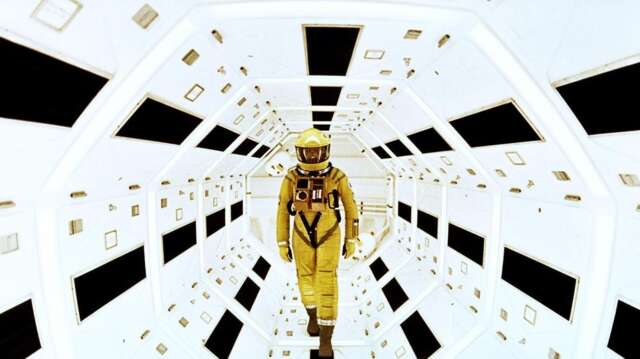 Released over a year before we would land on the moon for real, 2001: A Space Odyssey takes us to the moon, to Jupiter, and far beyond. This is about as hard as hard science fiction gets; even 55 years later, the visual effects still hold up incredibly well thanks to director Stanley Kubrick’s relentless commitment to accuracy and realism. It’s also a fascinating story about man’s place in the universe, the dangers of technology, and the incomprehensibility of deep space. It’s a slow movie, but a beautiful one. 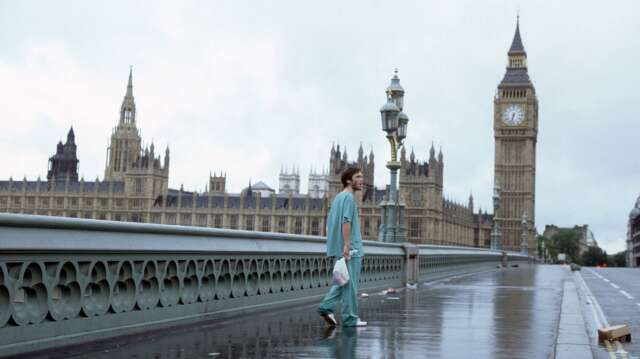 We’re pretty zombied out these days after a thousand seasons of The Walking Dead, but when 28 Days Later first hit, it felt like a fresh take on the walking dead. Instead of lumbering, moaning corpses, the zombies of 28 Days Later are as fast as they are ruthless, making every encounter with them terrifying. You don’t just sneak by these guys–you stay away from them. If you see them, you run.

3. The Matrix Series and The Animatrix 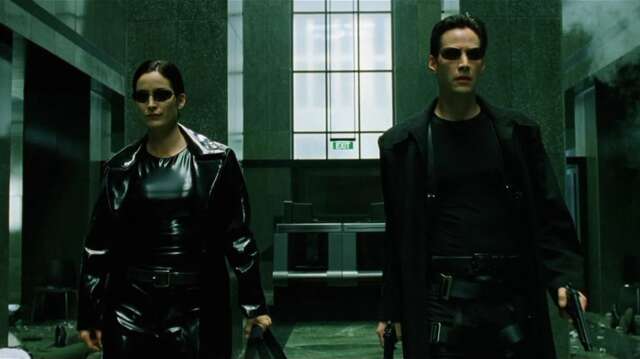 The virtual world of The Matrix turned our mundane everyday world into the playground of trenchcoat-clad rebels and G Men that seem to be everywhere at once. Somehow virtually every scene of this movie is memorable and quotable. While the films that followed never quite reached the hype level, they still make for interesting, memorable watches that combine filmmaking, technology, and philosophy into one epic package.

The Matrix is an iconic film that lays out a fascinating world–but necessarily focuses all of its effort on its main character, Neo. There’s a whole wide world of possibility out there, though, and The Animatrix explores the many different ways the Matrix could manifest. This animated anthology gives us insight into the robot revolution, the ways humanity tries to fight back against the machines, and the many ways in which the Matrix can glitch. If you love the Matrix but are yearning for something more than Neo and his crew, The Animatrix is what you need.

While the latest entry in the franchise, Matrix Resurrections, is divisive, fans of the series won’t want to miss it as it has a lot to say not just about Neo’s journey, but about the journey of the films themselves and their fans as well. 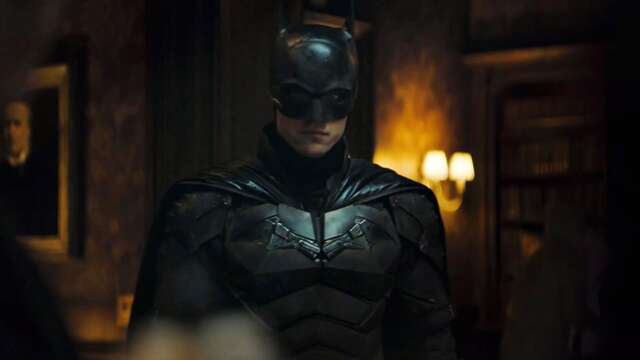 The latest entry in the Batman franchise doesn’t lean on science fiction as hard as many of the other films in this list, but it gives us a look at a young and inexperienced Bruce Wayne still figuring out what it means to be Batman. He already has some of his infamous detective tools, like a set of contact lenses that record everything he sees, but he just as often stumbles and struggles as he learns to use his new tools. It’s a long film, but one of the best-looking superhero films in a while, and Robert Pattinson brings this awkward, antisocial Bruce Wayne to life perfectly. 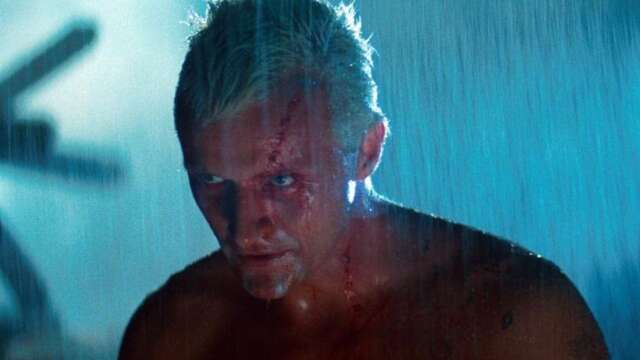 This list is filled with influential films, but few are as influential as Ridley Scott’s 1982 film Blade Runner. While it was a box office bomb, it has become a science fiction classic beloved by fans of the genre. It has inspired elements of films from Total Recall and the Matrix, and continues to be one of the most atmospheric films of all time… 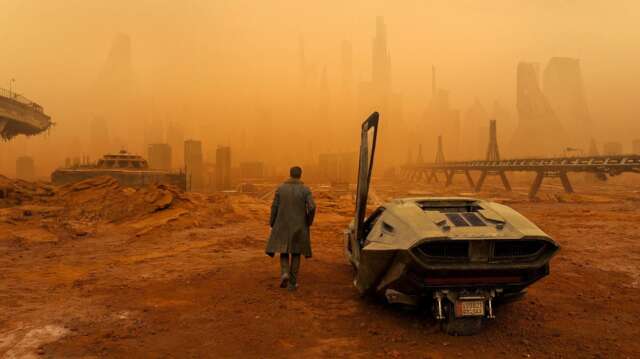 But then, how do you make a sequel to a 30-year-old, iconic sci-fi film that has a conclusive ending? Ask Denis Villeneuve, because Blade Runner 2049 is the answer. Blade Runner 2049 both explores a brand new story and follows up on the implications of the original, but it’s also a gorgeous film full of Villeneuve’s trademark epic shots.

7. The Day After Tomorrow 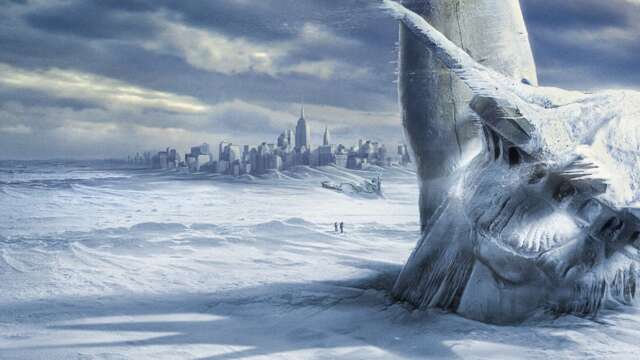 The title of this movie might sound like a rom-com film, but it couldn’t be further from it. The 2004 film follows father and son Jack (Dennis Quaid) and Sam Hall (Jake Gyllenhaal). Jack suspects the world is about to go through a huge, overnight climate shift that begins a new Ice Age, and Sam is just trying to survive in New York City. The Day After Tomorrow is a classic disaster film both for how much fun it is to watch and for how utterly untethered from reality it is. 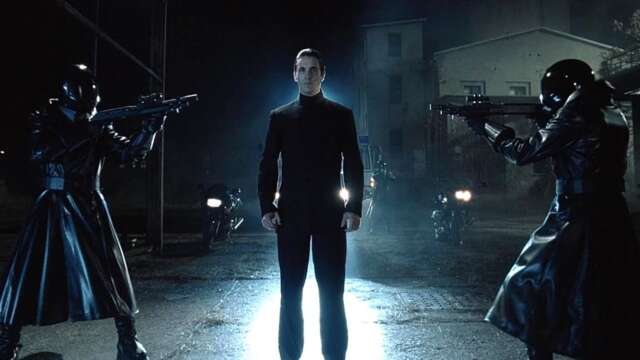 Finally, someone dared to ask: what if Fahrenheit 451 had really cool gun fights? Equilibrium is one of Christian Bale’s early sci-fi films. Set in a future where people take medication to suppress their emotions and, thus, lose interest in art, music, and anything else that brings us passion, Bale’s character is a Tetragrammaton Cleric, an investigator and enforce trained to take down any instances of rebellion against Libria’s emotionless regime. The Clerics use Gun Kata to fight the revolutionaries, treating pistols more like melee weapons than ranged ones. The plot is simple–you know how it goes from the opening moments. But Bale and co-star Sean Bean give the characters gravitas, and the action sequences are well worth the price of entry.

Alex Garland’s Ex Machina is about artificial intelligence, irresponsible inventors, and the dangerous potential of new technology. A programmer named Caleb (Domnhall Gleeson) wins a chance to visit the estate of his company’s CEO (Oscar Isaac). There, his boss introduces him to his latest experiments in making an artificial but convincing facsimile of a human (Alicia Vikander). The characters manipulate each other for their own agendas, and we have to ask over and over which of these characters is the most human–and what is it exactly that makes them human? The haunting ending will stick in your mind for days. 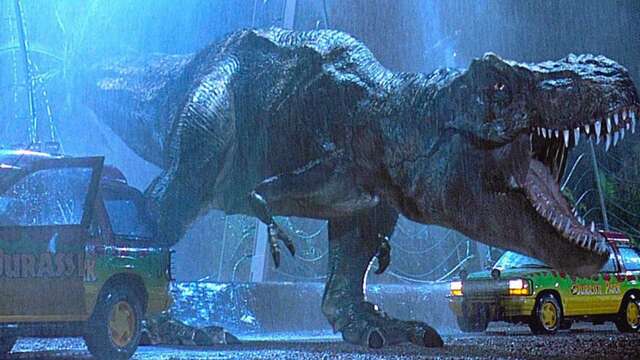 Jurassic Park is simultaneously one of the greatest achievements of practical visual effects and one of the earliest uses of convincing CGI–and despite all that technology it also manages to be one of the best sci-fi movies ever. When the dinosaurs that were terrifying park guests weren’t animatronic, they were made with revolutionary CGI technology that rebels at Industrial Light & Magic had to create after hours and in secret to get made. If they hadn’t, we might’ve ended up with a very different film. 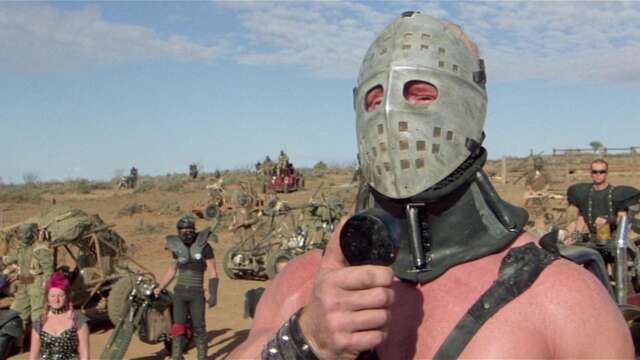 Mad Max was thinking about climate change before it was even on the lips of most people in the world. After nuclear war destroys the planet, the few left behind scramble to survive, finding water where they can and roaming the wasteland in cobbled-together cars. George Miller and his crew couldn’t have known at the time that they were creating the look of the post-apocalypse, countless movies and games have aped what he did in The Road Warrior… 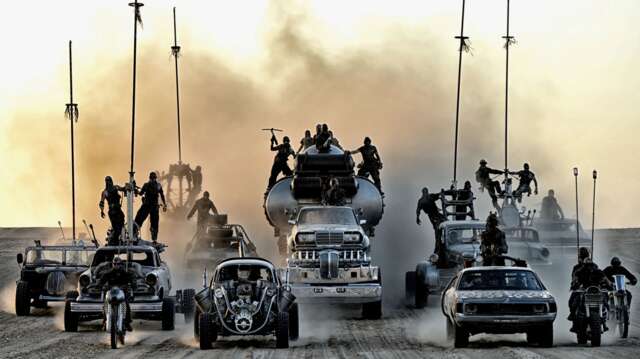 Then, in 2015, Miller returned to the characters for the first time in decades and gave us not just a new Max Rockatansky with Tom Hardy, but a brand new protagonist, Charlize Theron’s Furiosa. Fury Road feels authentically Mad Max while giving us a brand new villain to hate and a different, more broken version of the hero we’re used to. Fury Road isn’t a sequel, 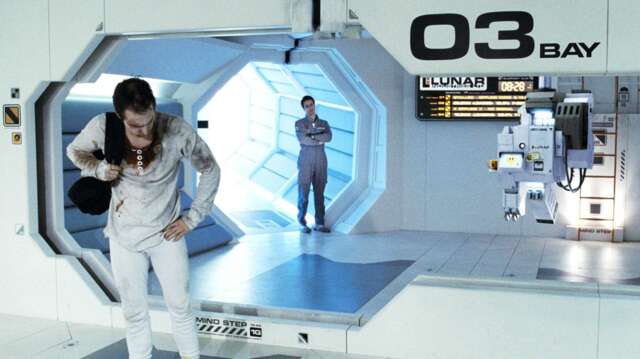 The Earth’s helium supply is dwindling, but our moon still has plenty. In the near future, Lunar Industries mines Helium-3 from the moon’s surface through an automated system supervised by one man, Sam Bell (Sam Rockwell). As Sam begins to hallucinate, he becomes suspicious that not everything he’s been told is true. Director Duncan Jones creates an intimate, beautiful movie that brings in themes of humanity, capitalism, and artificial intelligence to create a tight, engaging science fiction film. Content Warning: The AI in this film is played by Kevin Spacey, who sucks.

14. Nausicaa of the Valley of the Wind 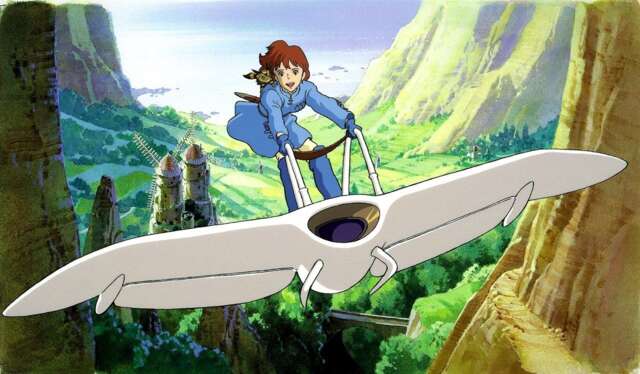 One of Miyazaki’s earliest anime films, Nausicaa reads more like a fantasy than science fiction, but it’s sci-fi through and through. Set 1000 years after an apocalyptic war that left much of the world a toxic wasteland, Nausicaa lives in a small pocket of humanity in a grassy, windy valley. Venturing outside, however, is a dangerous activity that requires a glider and a gas mask. It’s one of Miyazaki’s most beautiful films and one of his best loved. 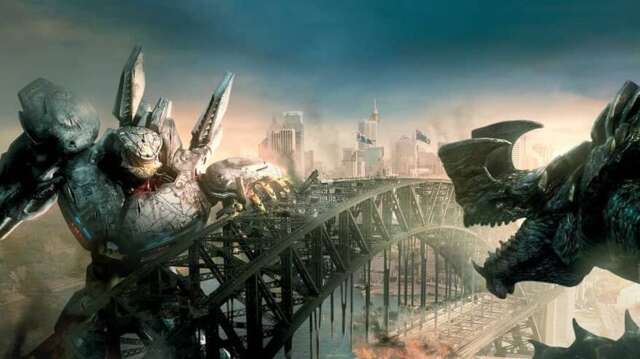 Guillermo del Toro is best known for quiet, tense, and scary films like Pan’s Labyrinth and the Devil’s Backbone, but movies like Hellboy and Blade II are a good reminder that he’s just a big nerd with a great eye for film. While those movies looked to comics for their inspiration, Pacific Rim looks to Japanese Kaiju monsters like Godzilla and giant hero stories like Ultraman and Power Rangers. Pacific Rim is packed with entertaining performances from actors like Charlie Day, Idris Elba, and Ron Perlman, and fun special effects that show off the battles between the monsters rising out of the sea and the mecha pilots working overtime to hold them back.

Is Space Jam a basketball film, a Looney Tunes flick, or a sci-fi movie? I don’t know, does a space monster fold Michael Jordan up into a basketball, causing the retired basketball player to join the Tunes in their quest for victory and freedom? Space Jam isn’t just one or another of these genres, it’s all three. It’s time to come on and slam and welcome your whole family to the jam. 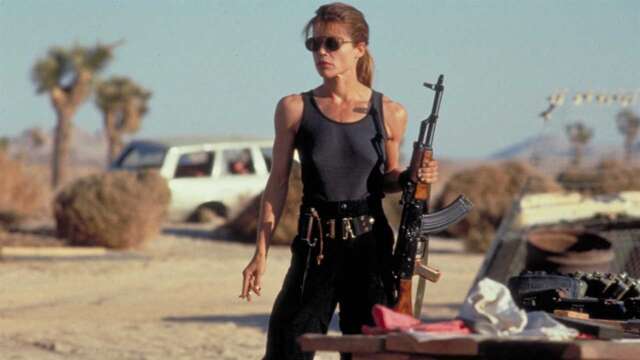 If we posted this list without Terminator 2: Judgment Day, we’re pretty sure our nerd cards would be revoked. T2, like Aliens before it, takes the sci-fi horror premise of the original film and reimagines it, thanks to James Cameron, as a sci-fi action blockbuster. The film’s visual effects were revolutionary at the time, and stand up better than you might think given how old it is, and the film is a blast from start to finish. 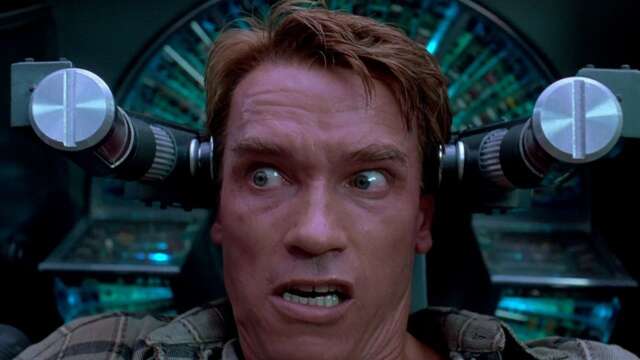 A list of the best sci-fi films isn’t complete without at least one entry from Paul Verhoeven. Total Recall jumps off of Philip K. Dick’s short story, We Can Remember It For You Wholesale. When protagonist Quaid (Arnold Schwarzenegger) takes a virtual vacation in the form of memory implants, things get very weird very quickly, and it gets difficult to tell what’s real and what isn’t. The movie is filled with iconic visuals like Kuato and the folding disguise Quaid uses. Schwarzenegger feels shoehorned in here–an example of an early 90s movie using a giant star that doesn’t fit the film to try to sell it to a wide audience–but he and the movie are both quite enjoyable all the same. 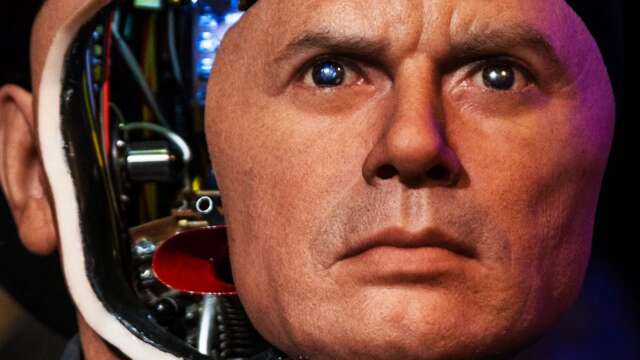 For 1973’s Westworld, it’s less about the film and more about the groundwork it would lay. The screenplay written by Michael Crichton will sound very familiar to anyone who has watched the HBO series of the same name, now at the end of its fourth season: Robotic actors at an adult-oriented theme park malfunction, sending everything into chaos. Not only would this eventually be reimagined into the series we see today, this is one of Michael Crichton’s early experiments with theme parks gone awry, a subject he would master with Jurassic Park 20 years later.

Technology as a Competitive Edge in the Battle for Talent