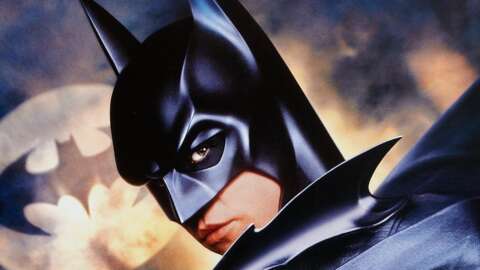 Val Kilmer is ready to step back into the role of Batman once again, according to IGN. When asked in an email interview to promote Top Gun: Maverick whether he’d have any interest in playing Batman and Bruce Wayne again, even in a cameo, the actor said, “Yea, please.”

The answer is a surprising turnabout from Kilmer’s 2020 introspection on the role for a New York Times profile, in which he admits that while filming 1995’s Batman Forever, he simply did not enjoy playing Batman. In the piece, Kilmer recalls that Warren Buffett and his grandchildren visited the set to meet Batman, and that he stayed around in the suit for their benefit. However, once his guests arrived, it became clear that they didn’t actually care about meeting Batman, and wanted to play with his gadgets instead. “That’s why it’s so easy to have five or six Batmans,” Kilmer told the reporter. “It’s not about Batman. There is no Batman.” Additionally, as many actors who have played Batman have also observed, Kilmer says the suit was extremely uncomfortable.

IGN: Specifically, we now have multiple universes in comic book movies where actors who’ve played Batman or Spider-Man in the past team up with the current actor playing the role. Would you have any interest in playing Batman/Bruce Wayne again even in a cameo?

The DC movie franchise is due to have a big multiverse story when The Flash hits theaters next year. The film will include multiple versions of Batman, including Ben Affleck and Michael Keaton’s take on the character–each, obviously, a bit older than when they stepped into the role originally.

Also elsewhere in the franchise, Robert Pattison’s Batman will be returning for Batman 2. On Tuesday, it was announced that filmmaker Matt Reeves will be working with writer Mattson Tomlin (Netflix’s BRZRKR) on the upcoming Batman 2’s script. Although Tomlin didn’t receive screenwriting credit, he worked with Reeves on this year’s reboot.

The new iPhone is coming and for Apple’s sake, it had better be a hit

Destiny 2 getting weapon balance changes, as Lord of Wolves gets nerfed