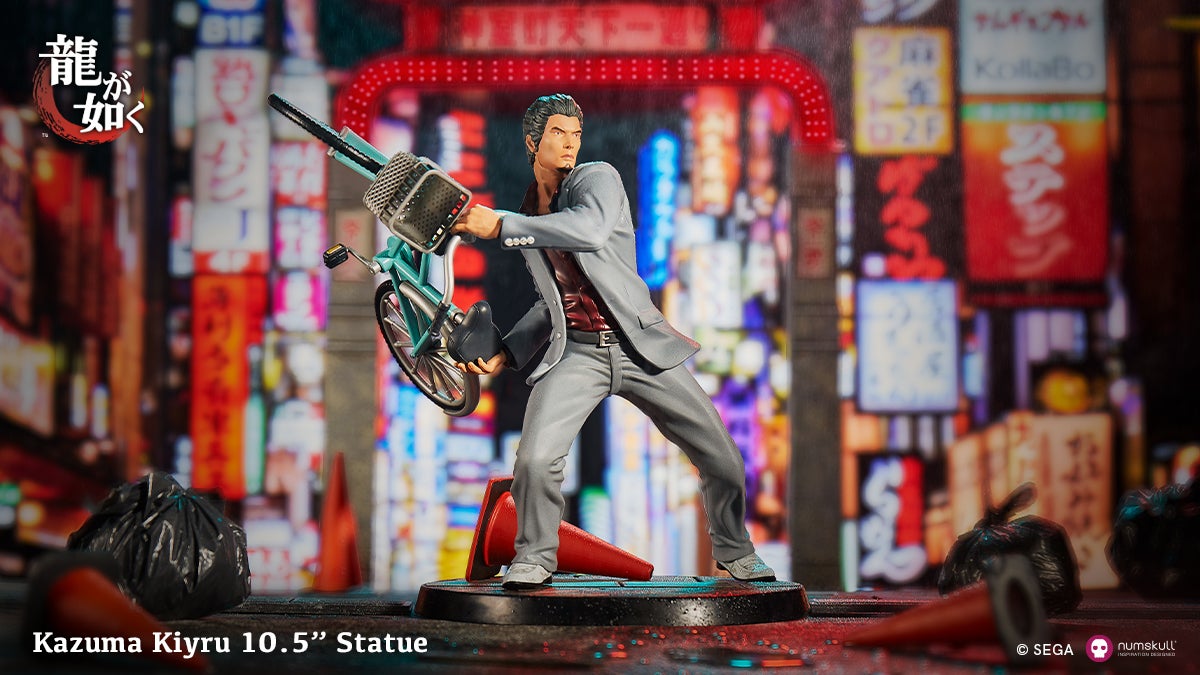 We already know gaming merchandiser Numskull is busy building collectible figurines for a host of our favourite franchises, including Destiny, Silent Hill, and Resident Evil, but this week we discovered the next game character to get a replica will be Yakuza’s Kazuma Kiryu.

Officially licensed by Sega, the Ryū ga Gotoku/Yakuza Statue is a “highly detailed replica statue, from the paintwork to Kiryu’s bicycle itself” and stands at an impressive 10.5″ (26.7cm) tall. It also include a “intricate” base “with classic Yakuza props from the game”.

Here’s a teaser video with all the details and close-ups:

“The exquisite design shows Kiryu in his famous grounded stance, looking super sharp in his grey suit, wielding a bike as a weapon – ready to launch it at anyone who gets in his way!” Numskull says.

You can’t buy the statue direct from Numskull but you can find it on the official Sega store for the recommended retail price of £90 (€100/USD $100 USD).

ICYMI, you can now play as Master Chief in Yakuza 0 thanks to the power of modder Kashiiera. The mod replaces usual protagonist Kiryu Kazuma with Halo’s poster boy Master Chief.

Kashiiera is primarily a Halo modder as it’s their favourite franchise, but they also love Yakuza and so worked hard to project Master Chief’s model correctly onto Kiryu’s to keep him looking as natural as possible.

Numskull also recently unveiled a new range of Silent Hill collectibles, kicking off with the Bubble Head Nurse, and confirmed that the next figurine to join its Destiny 2 line-up is the fantastic Lord Shaxx, who should be coming to a Crucible match near you in October. The next addition to its Resident Evil range is a terrifying recreation of Resident Evil 3’s Nemesis.

Looking for a video for the Yakuza statue, I also stumbled upon the company’s “Countdown Characters” range which gives 24 parts over the month of December for people to build an advent gaming statue themselves, including Sonic, Destiny’s Ghost, Star Trek’s USS Enterprise, and the seasonal-appropriate The Grinch.

iPad 10th Gen: Everything we know about Apple’s 2022 iPad

1m have already flocked to Cult of the Lamb